The ROBO Cylinder® equipped as standard with a Battery-less Absolute Encoder has been added to the "IK Series". It helps reduce the design and assembly steps.

The ROBO Cylinder® RCP6 Series has been adopted to achieve even higher speeds compared with conventional models. 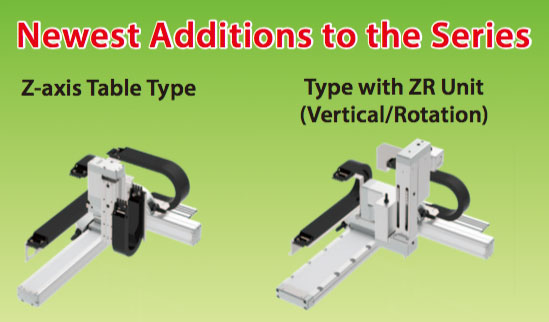 The available configurations have been greatly expanded from the conventional models, allowing the ideal selection to suit your needs from 516 options.

New configurations include a table type (TA) with the Z-axis and a model with ZR unit (vertical/rotation).

Equipped as standard with Battery-less Absolute Encoder for all configuration axes.
No battery maintenance is required since there is no battery.
Homing operation is not required at startup or after emergency stop or malfunction.
This reduces your operation time, resulting in reduced production costs.

Compatible with PowerCON® which is equipped with a high-output driver.
The maximum speed has been increased with the use of PowerCON®.
This can reduce cycle time and help improve productivity.

Please contact us for IK Cartesian CAD files for your configurations.

Stay up to date on IAI America innovations, products and catalogs.

Stay Informed by Following Us

Follows
We use cookies on our website to give you the most relevant experience by remembering your preferences and repeat visits. By clicking “Accept”, you consent to their use.
Do not sell my personal information.
Cookie SettingsAcceptRead More
Manage consent