Compact and low-thrust rod type actuator that can even be used for simple pressing. The high-precision position control enables easy adjustment of the push force and the position control, which is typically difficult for oil-hydraulic equipment.

Without using an external load cell, encoder or PLC, processing history data such as positioning (mm), load (N), and pressure results can be output to a PLC, computer or dedicated display unit.

IAI's original control technology has achieved both a "5t trust" and "220mm/s approach speed" with the 3kW motor.

The servo press specification has been expanded. With the load cell equipped as standard feature, force control is possible.

What Is the Push-motion Operation?

Similar to an air cylinder, push-motion operation is the function of keeping the rod and slider pushed to the work, etc. Servo press provides superior stop stability during pressing, which makes them optimal for push-motion operation. Also, servo press can be used in a wide variety of applications because they can be used in work operations that require strong push force, such as press fitting and riveting work.

What Is the Force Control?

A function that can perform high-precision push control output using the feedback data from the dedicated load cell installed in the actuator.

What Is the Servo Press Specification?

The specification which can perform various push-motion operations by using the press program. For details, please click here.

By attaching a dedicated load cell to the rod tip, the actual load applied to the press target can be detected. This allows for high-precision load control with a loading repeatability of ±0.5% F.S. (full scale).

NOTE: * If a Load Cell Calibration Certificate is required from the load cell vendor, there is an extra charge and it must be ordered on the same PO as the actuator. Ordering the certificate after purchasing the actuator will require sending the load cell back to Japan.

Three new types have been added, allowing you to select from a 20N to 50,000N (2kg to 5t) range. The development of a large variety of models allows you to pick models that suit your applications. 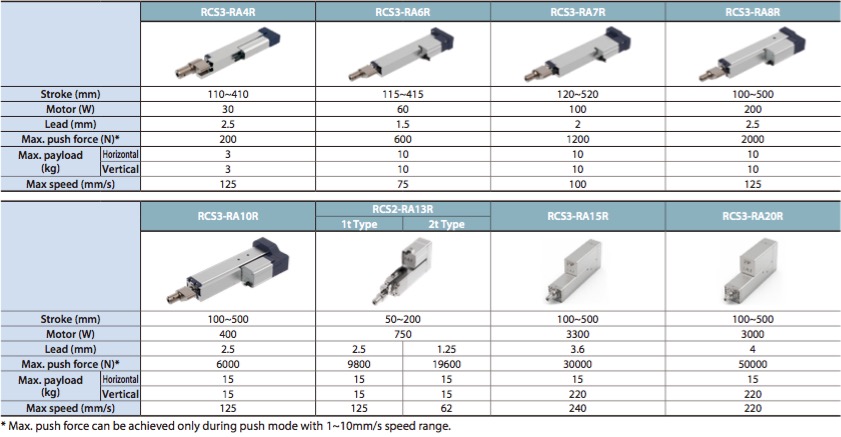 It’s possible to perform analog output of load data (4-20mA). By using a display panel manufactured by a third party, it is possible to display 2D graphs of the displacement vs. load cell output and judge them. Also, connecting a pulse counter allows you to check the feedback pulses.

With the Press Programming feature in the RC software, one of two control methods, "Speed Control" or "Force Control", can be selected. In addition, one of four stop conditions, "Position", "Distance", "Load", or "Incremental Load", can be selected as the method for stopping. By utilizing a total of eight types of press methods, it is possible to handle a variety of press operations.

From the end of press to the end of the stop state, it is possible to perform position judgment and load judgment.

● When a result of NG has been detected for either the position or load, the program ends abnormally ● It is also possible to set position only, load only, or neither

*Registration with CADENAS is required to download CAD files.

Stay up to date on IAI America innovations, products and catalogs.

Stay Informed by Following Us